On 29 September 2022, the German Agricultural Research Alliance (DAFA) organized a kick-off event to launch a strategic platform on Controlled Environment Agriculture (CEA). This event was about exploring the technological potential but also the economic risks and social acceptance of new ways of producing food and ensuring food security.

Experts showed that CEA technologies can offer opportunities for improving food production under unfavorable environmental conditions. This applies in particular to water efficiency. The closed loop systems have significantly lower water requirements. In a CEA environment, the use of pesticides can also be significantly reduced. Systems such as vertical faming can optimize the space required for food production. By breeding fungi, algae, and insects, alternative protein sources can be developed as food and feed. However, in view of the currently exorbitant rise in energy prices in Europe, the high energy requirements of some of such systems are of concern. CEA systems therefore only pay off with low-energy concepts and energy supply from their own renewable resources. 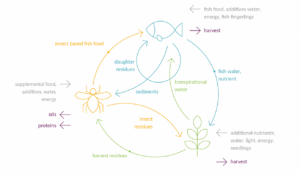 In his keynote, Christian Ulrichs from Humboldt University of Berlin presented Cubes Circle, a research network funded by the Federal Ministry of Education and Research (BMBF). Coordinated by Christian Ulrichs, Cubes Circle is a modular and resource-efficient system in which plants, insects, and fish are cultivated in communicating cycles and use the respective waste materials in the production processes. (Read more here: www.cubescircle.de).

In his lecture on aquaculture and vegetable production, Werner Kloas from the Leibniz Institute for Freshwater Ecology and Inland Fisheries, who is also involved in the Cubes Circle project, highlighted the importance of closed, controlled systems in aquaculture for the protection of water resources. He referred to the “tomato fish” project in Berlin, a combined system with two circuits that has been operating for several years. Research is currently being carried out on which fish species are suitable for such projects.

Thomas Brück from Technical University of Munich (TUM) presented projects from the TUM AlgaeTec Center. There still seems to be great potential here. Out of around 150,000 species of algae, only 10-15 are currently used commercially. The fast-growing algae can achieve high yields without large inputs and can potentially be used as protein-rich food and animal feed. They can also be used as a raw material for biofuels.

Andreas Vilciniskas from Justus Liebig University Giessen presented examples of the potential use of insects and technologies for breeding them. While in some countries like China, the human consumption of insects is not taboo, in western countries the potential of insects is seen primarily as a protein-rich animal feed—an alternative to soybeans. Of particular interest here is the rapidly reproducing black soldier fly (hermetia illucens). So far, however, insect breeding in Germany has not been profitable, since the German hygiene regulations mean that insects cannot be fed with waste materials but only with certified animal feed. Therefore, for cost reasons, animal feed made from insect meal has so far not been an alternative to soybeans.

In his contribution “Sustainability of insect production”, Christian Lambertz from the Research Institute for Organic Agriculture (FIBL) also highlighted this issue. According to current law, insects must not be fed with biowaste and excrements. There are also aspects of animal welfare to consider in the sustainable and resilient production of insects.

Daniel Grimm from the Thuenen Institute for Organic Farming presented the indoor cultivation of edible mushrooms, a low-tech method of CEA that is already widespread, including in China. Certain types of edible mushrooms, such as button mushrooms and oyster mushrooms, can be cultivated very well on substrates made from agricultural residues such as corn cobs, straw, and wood waste. The substrates used for the mushroom cultures can then be composted and used as food for earthworms and insects. Indoor mushroom cultivation is becoming increasingly important, as mushrooms are a good protein-rich alternative to meat.

Jess Bunchat, who works at the DLR Institute of Space Systems in Bremen, reported on a research project dealing with self-sufficient food production for future space missions to the moon and mars. With funds from the EU Horizon 2020 program, the EDEN ISS greenhouse was implemented in the Antarctic, where technologies have been tested since 2018 that could ensure the vegetable and salad supply of a spaceship crew in a circulatory system over a longer period of time. These systems must be simple, such a greenhouse must also serve as storage space for other materials during transport to the space station, and the cultivation of the plants must be easy and not too time-consuming for the people on board the space station. Jess Bunchat pointed out that such greenhouse systems are not only suitable for longer future space missions, but can already be used on earth in regions with very unfavorable natural conditions, e.g., refugee camps on the edge of a desert. Here, such systems would then enable people to, at least partially, provide themselves with vegetables without having to rely on deliveries from aid organizations.

The presentation by Oscar Monje from the Kennedy Space Center in Florida, who reported on the possibilities of “space farming”, went in a similar direction. Here, the key challenge is that the planting systems and cycles must be very robust and resilient as a collapse of the plants could be fatal, for example during a long-term mars mission. 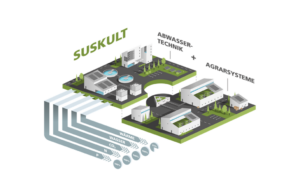 In his presentation, Andreas Ulbrich from Osnabrück University of Applied Sciences spoke about sustainability in vegetable production and what contribution CEA can make here. The current challenges are the water supply for outdoor crops and the energy costs for greenhouse crops. Andreas Ulbrich mentioned that, in view of the dramatic rise in energy prices, a large proportion of the greenhouses in Holland, for example, are currently shut down. Intelligent energy concepts are therefore necessary. The Agrar Cycle project, in which the Osnabrück University of Applied Sciences is involved, is about resilient closed loops, an indoor vertical farm with a very low water requirement and low need for pesticides. He also presented the SUSKULT project, which deals with sustainable cultivation systems for food in resilient metropolitan regions and which is funded by the Federal Ministry of Education and Research (BMBF) as part of the national research strategy for the bioeconomy. Coordinated by the Fraunhofer Institute for Environment, Safety and Energy Technology, the project seeks to develop technologies for the reuse of treated sewage water in urban agriculture (Read more here: https://suskult.de/index.php/ueber-suskult/).

Katrin Specht from the Institute for Regional and Urban Development (ILS) reported on an investigation into the consumer acceptance of CEA foods. On the one hand, there is a positive perception of CEA’s contribution to sustainability through reduced consumption of natural resources, input of chemicals, and transportation costs. CEA is thus seen as a contribution to climate mitigation and adaptation. At the same time, however, negative acceptance factors were noted, which are linked to the fact that the production method of CEA is usually highly technical, and this “artificial” food production contradicts the idealized images of food production in rural idylls that are still in the minds of many consumers and repeatedly promoted by the advertising industry. Acceptance of CEA gets worse the more technical it gets. CEA is also perceived as something that is aimed more at elite consumer groups.

Dana Bunzel reported on studies by the Max Rubner Institute on food quality and safety. Overall, no serious safety deficiencies could be detected in CEA foods. In terms of nutrient content, leafy vegetables produced under CEA conditions were mid-range compared to conventionally produced vegetables. Since CEA plant production usually gets by without soil as nutrient media, the products cannot be certified as products from organic farming, even if they are produced without chemicals. Participants therefore also discussed whether there was a need for a separate CEA label.

Dr. Eva Sternfeld
Share
0
All News
All Events
All Downloads